After having fun with our Edible miniature Water Beads we pulled out our other new experiment, creatively dubbed Large Edible Water Beads.

This idea was suggested to me by the lovely Multicraftingmummy via twitter. I was quite excited about it and ordered the ingredients as soon as possible!

I decided to do this one as an under the sea theme.

This play uses large tapioca pearls. You can order these online on Ebay or Amazon. Prices vary so shop around.

You can buy tapioca pearls in a quick cook variety. I thought the ones I had ordered were quick cook, but soon realised that they weren’t (two hours of boiling later.)

I got quite frustrated making this as the instructions on the packaging were vague – boil until transparent. A quick Google told me to take the pearls off the heat when they became gelatinous, cover them and leave them for 5-10 minutes. This solved it for me and they were ready to use.

I used half a pack of pearls and added some blue food colouring to the water to create an Under the Sea Theme.

I made this the night before play and stored it in the fridge. In the morning it was almost solid! I boiled the kettle and poured a thin layer of boiling water over the beads, left it for a minute and then stirred them. They were as good as new after this! Please leave to cool before allowing your little one to play with them. Burnt fingers are nobodies friend.

These beads look like baked beans to me! However they feel really squishy and gloopy when you run your hands through them. The individual beads feel amazing, almost like a super thick gloppy contact lens. You have to try them!

We pulled this out when Buddy began to get bored with the Edible miniature Water Beads. This play piqued his interest once again and he got stuck straight in!

Buddy had a tentative feel before reaching for the toys.

He enjoyed reacquainting himself with his bath toys for a while, before becoming intrigued by the lovely blue goo. He had a quick taste test (only one this time, this is progress!) before getting his hand right in there.

After a good rummage, Buddy decided to have a dig with his bucket and spade again. He tried really hard to get the beads into the bucket but he’s not quite there yet! 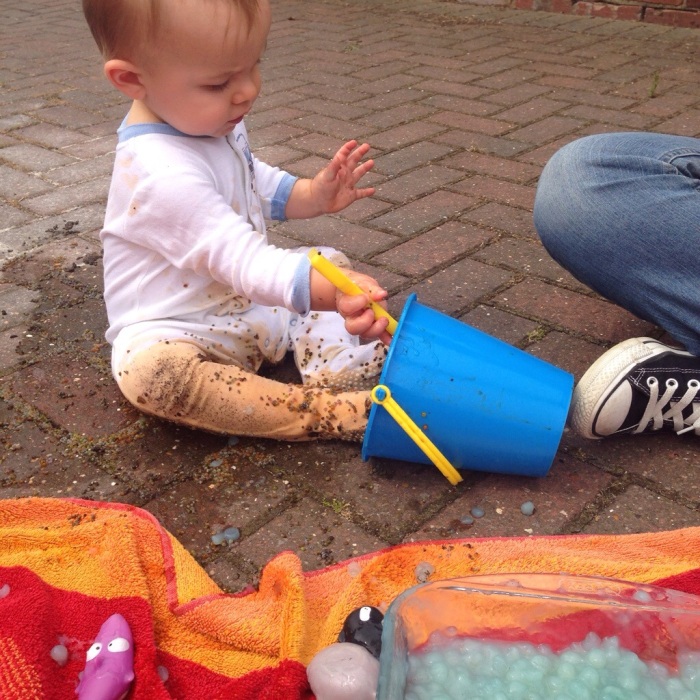 Auntie Lulu could contain herself no more by this point and had to join in with the squidging and squishing. Buddy decided to join in! 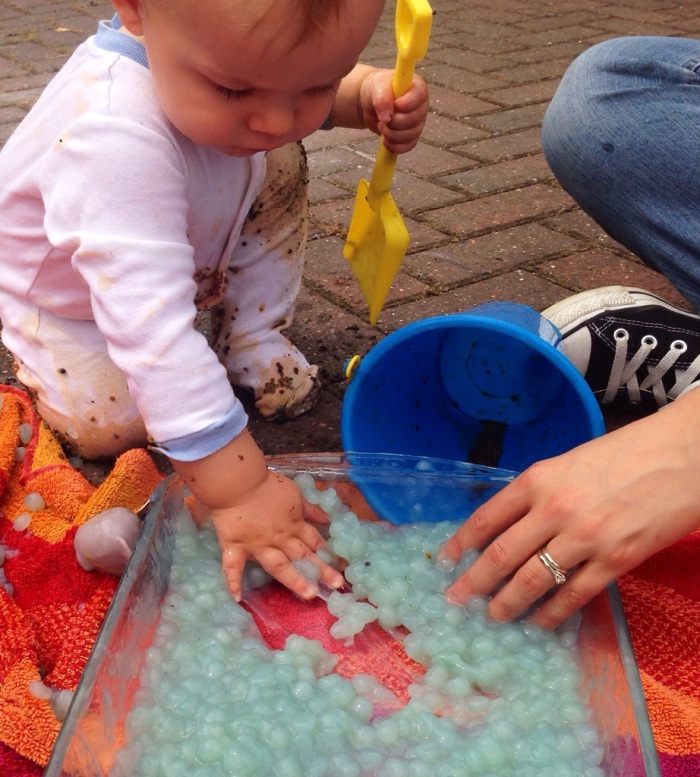 Once he had decided he liked the feel of the water beads, Buddy couldn’t get enough of them!

I love the concentration on his face in this picture. He was so engrossed in the task at hand and was intrigued by the lovely, goopy beads.

This was such a fun play. The texture of these beads differed a lot from the miniature edible beads, but they were just as fun!

Fine motor skills – picking up objects and individual beads. Touching and squeezing beads,
Gross motor skills – moving around the tray. Standing, squatting and sitting.
Problem solving – he might not have managed scooping into the bucket with the spade but he certainly got some good practice!
Exploring through play – it’s a given, but worth mentioning every time in my opinion!

These beads are sticky. No actually these beads are super sticky. Please do not do what we did, if you play with these on a towel you will spend 3+ hours picking blue gelatinous goop out of your towel or you will give up like I did and throw it away. Yes this is wasteful but I was concerned about the pearls clogging up my washing machine!

Next time we play with this we will play on a plastic mat!

This play does have food colouring in it. I use natural food colouring and have never had a problem with staining, however this is totally dependant on the colouring and washing detergent you choose to use. Please exercise caution and play in messy clothes.

So, if you decide to give this a try, please come back and let me know how it went. Comments make me smile.