I’ve been wanting to play with dough for a while but most of the recipes have a lot of salt in them which instantly puts me off as I know Buddy will be munching away at it as soon as he gets his hands on it. So I was really excited to find an edible dough with absolutely no nasties in it. Add in the fact that it is no cook AND gluten free. Well, its just perfect.

Spinach and Cornflour Dough
This wonderful recipe can be found at Wild Flower Ramblings on the link below.
Gluten Free Edible Spinach Dough

Flour and Water Porridge Dough
This is a recipe of my own making which turned out very well. It has a more gooey texture than the spinach dough, however the added porridge oats add a nice additional sensory element. The best part of this recipe is that there are no measurements. You can continue to add flour and water until you have exactly the consistency you want.

Recipe
Add a piled handful of plain flour and a few drops of natural food colouring to a bowl. Start adding tap water and stir with a fork until you achieve your desired consistency. Add additional food colouring as required.
When you have the dough in your preferred consistency, sprinkle in some porridge oats (oatmeal) and knead it in.

Setting up play
As it was a nice day, we decided to play outside to minimise mess. I just didn’t fancy trying to get spinach stains out of the carpet. We set up the paddling pool and threw in a few spoons, bath toys and wooden blocks. 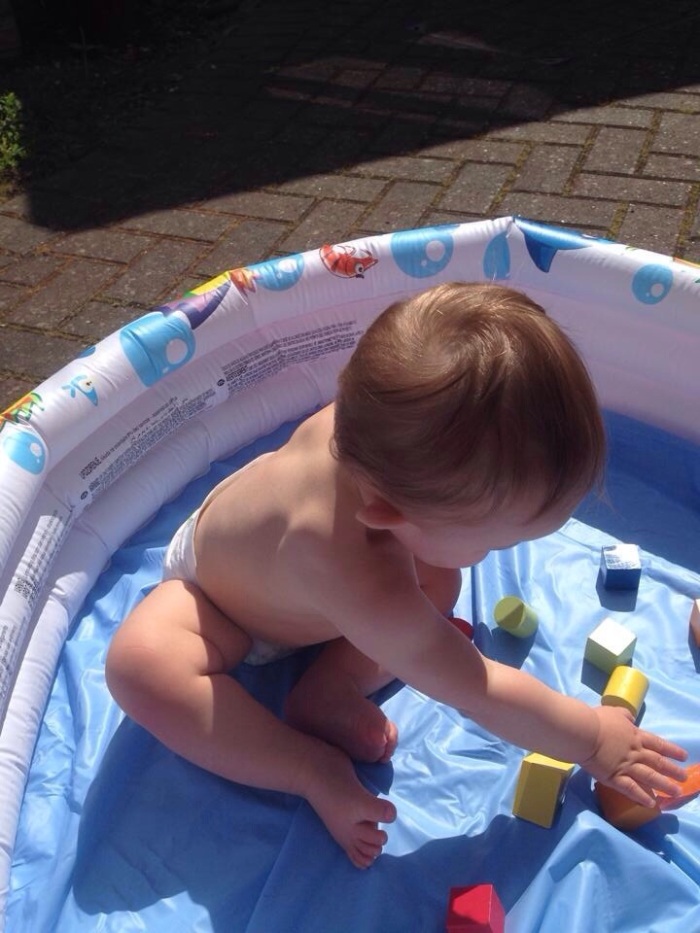 As soon as Buddy saw the dough he was keen to get his hands on it.

He shied away from the spinach dough after the first touch, but enjoyed prodding the porridge dough and slapping it with a spoon. 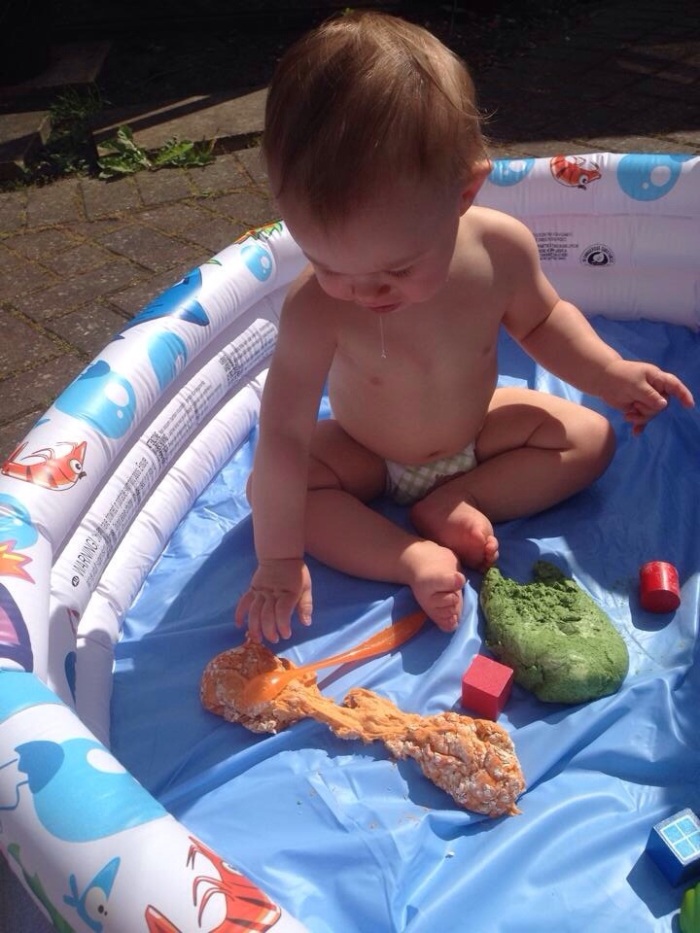 Buddy stretched some of the porridge dough and seemed bemused by the texture. The train driver then offered a helping hand to make the dough splodge and drip in the pool. 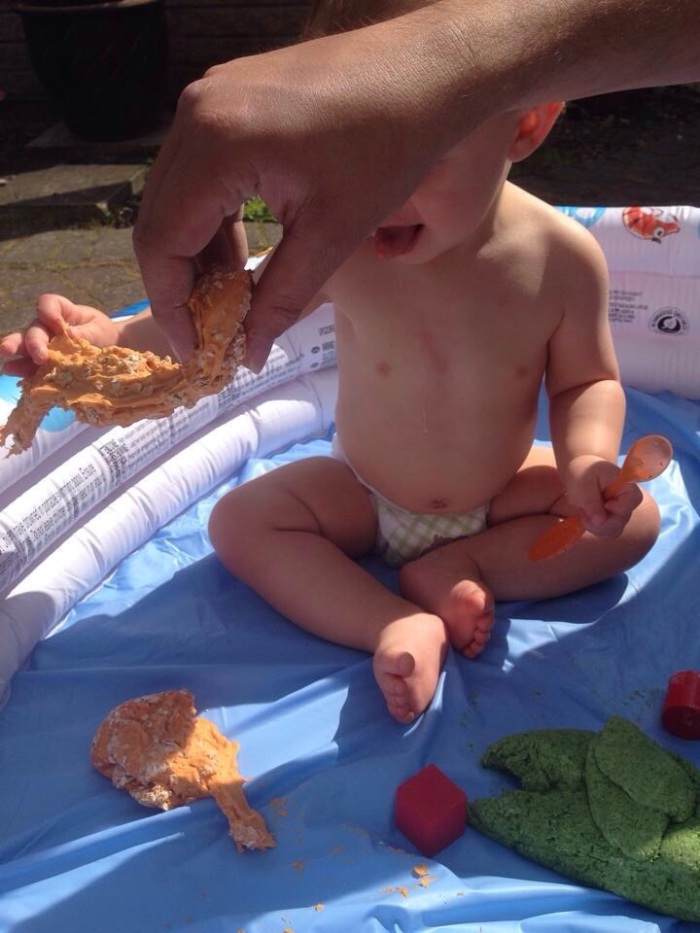 After playing with the porridge dough, Buddy braved another try with the spinach dough. He pressed a block into it and touched it some more.

Then it was back to the porridge dough. Buddy spent a while trying to help his duck swim in it.

Then a handful ended up on his foot and in his mouth! 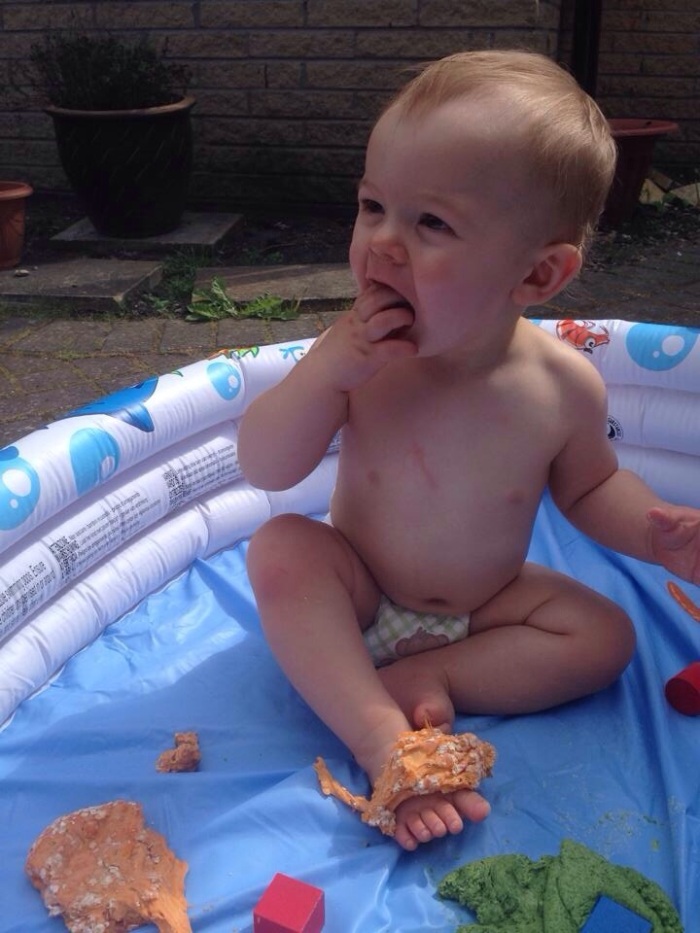 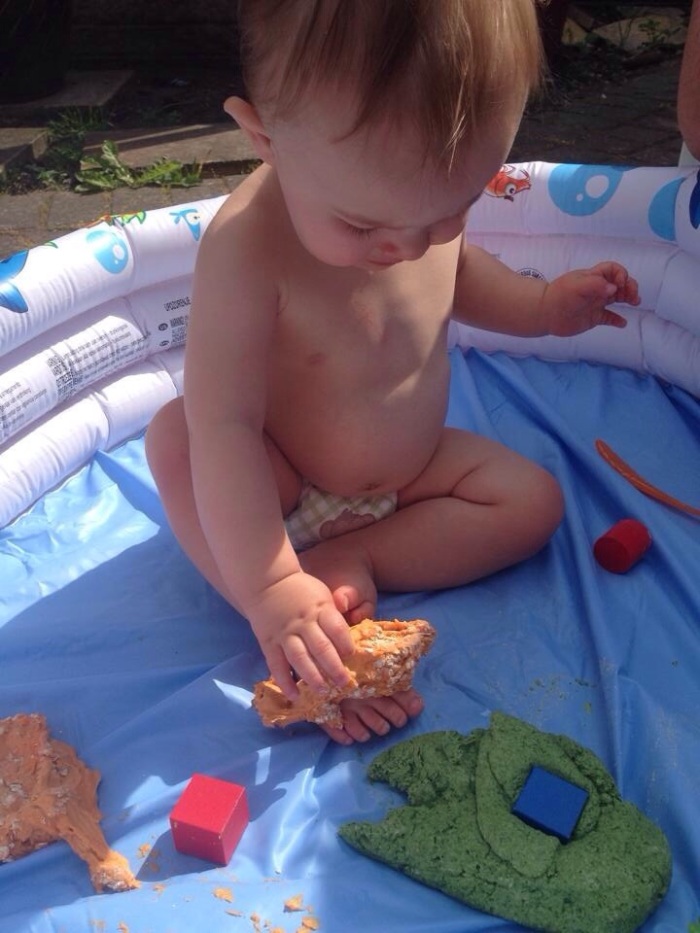 We had a great time playing with the dough and finished off with a paddling pool bath to minimise mess.

Expand on it?
The great thing about both of these recipes is that you can really play with the consistency by adding more or less flour so it could quite easily become a sensory goo activity.

I did consider adding frozen peas to the spinach dough to add an additional cold sensory element to it, however Buddy would most likely try to eat them and choke at his current age. As soon as he stops trying to ingest EVERYTHING I will definitely be giving it a go.

Hope you all enjoy making and playing! Please feel free to share any of your own play dough recipes too.